I’m really not one to follow trends… in fact I’m quite the opposite, but there’s this social media trend that’s been making the rounds which I’m sure you’re all sick of by now; the 10 Year Challenge. 💁‍

I won’t upload a photo of my sad adolescent self, but instead I thought I’d observe some of the 10-year differences based on myself as a whole person, rather than just my looks. Here we go:

#1: I’ve learned to put myself first when I need to
One thing I learned throughout the past few years is that I need to prioritise myself. I spent a long time neglecting my mental and physical health to put other people and things before them. I’ve thankfully come to realise that I need to do what’s best for me sometimes, even if that means having to say “no” in difficult situations.

#2: My anxiety still sucks, but at least I’m aware of it
When I was 15, I knew I had some issues, but I didn’t realise the extent of them. Apart from suffering from chronic pain back then, my mental state was a mess. I’ve battled with depression and still struggle with anxiety. I’m far from being the best I think I can be, but at least I’ve learned to see the signs in advance, and to manage it a bit better.

#3: I’ve been blessed with amazing friends
Throughout your teenage years, you meet a lot of people. I’ve had my fair share of damaging “friends” cross my path, but in general, I’ve really been blessed with some incredible long-term friends. Whether we’ve been friends for one year or twenty, I’m forever thankful for having such wonderful people in my life. 🙂

#4: I’m still a sensitive soul, but also kind of a badass
Over the past couple of years, I’ve started to take less crap, basically. Even though I tend to be quite sensitive and emotional, I’ve toughened up a great deal. I’ve been put in plenty of difficult situations which have made me stronger, more hard-working, and much, much braver.

#5: And finally, a point for the aesthetics 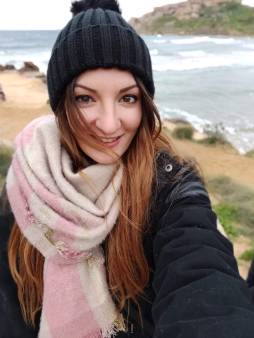 Since the original purpose behind this (silly) challenge is to see how your looks have or haven’t changed, here’s my take: I look much better than I did all throughout my teenage years. I’ve grown my hair out, fixed my nose, had my eyebrows microbladed to make them look like actual eyebrows, I dress better, and I try to keep myself in good shape. My skin has seen very little improvement unfortunately, but I haven’t completely lost hope in that. In general, I’d say that on most days I don’t totally hate how I look, which is a nice change. 😀

I think that sums it up quite nicely. Overall, I’m a very different person to who I was when I was 15, but I’m trying to grow up to be the person I needed at that age, and the best version of myself that I can be. As far as I’m concerned, I think I’m doing pretty well so far.

Here’s to another great 10 years ahead.

Get to know me

So who is this Cricket?
Let’s go back to where it all began…
Click here to get started!